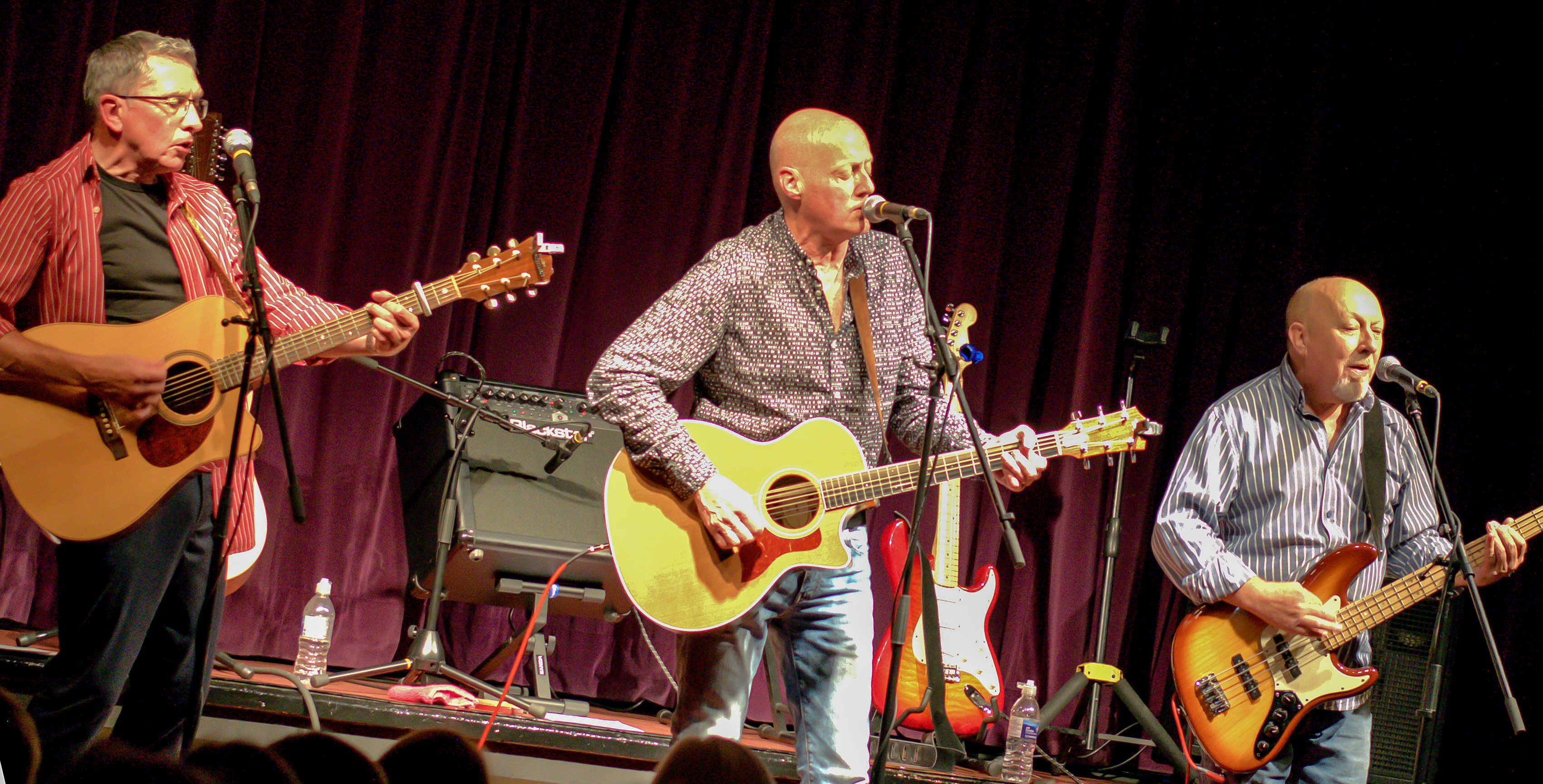 Photo: David Gillett
Dawson Dean (Graham Dawson and Chris Dean) are Staffordshire Moorlands based singer/songwriters and guitarists. They formed in 2016. The duo added bass player Geoff Berrow to the line-up in January 2019, effectively making them a three piece! In October 2017, they released their first album, Good Times, which features twelve of their original songs.

Their latest album, Symphony of Sound (10 original songs) was released in July 2019. Both albums are available on the usual internet music platforms.

Dawson Dean are experienced, confident performers of their self-penned songs, which are an eclectic, fine blend of acoustic, contemporary Folk/Pop/Americana, with strong melodies, close harmony vocals and duelling guitars. The addition of bass guitar gives them added punch and rhythm that compliments the two guitars. They play in a relaxed style which is very appealing, creating their own unique sound.

Chris had his first record deal and LP released in 1979 with The Crooks. A nice kind of symmetry as Dawson Dean’s latest recording was released in July 2019 – forty years later! In the intervening years he has played electric and acoustic guitar, done countless gigs, played with two or three bands, released several albums, and been influenced by many. He formed Dawson Dean in 2016 with Graham Dawson, when the two of them met and discovered they had a lot in common, being singer songwriter guitarists, and living near to each other in the Staffordshire Moorlands! He loves the acoustic sound that the band creates, and the contribution that Geoff Berrow on bass has made, to compliment the overall effect.

Graham started playing guitar when he was 12 and started writing songs in his early teens.
His early influences were Paul Simon, The Beatles, John Denver, Ralph McTell. More recently Jez Lowe and various Americana acts have widened his song writing style.
He started performing in local pub & club bands in the 1970s, before taking a 25 year “sabbatical” from live performances, until a move to the Biddulph area and the release of his first album “These Things Are Ours” in 2012 re-ignited his desire to perform.

In the 1970s, Geoff began his musical career as guitarist and vocalist in the clubs and pubs of the Midlands and North West before becoming involved in recording and audio visual production. He also took a long break from live performance but retained contact with music through choirs and musical theatre. After a stint playing in folk clubs and moving to bass guitar, he was a founder member of the successful bluegrass band “The Slippery Hill Boys” performing at mainly private functions until the band split up in 2017.
Geoff shares similar musical influences and is enjoying adding a new dimension to the songwriting of Dawson and Dean.

Hello and happy new year from us! Just to let you know that we're currently working on a new video which should be available in a week or so! The picture was taken last summer when we were allowed out! Stay safe! ...

A Very Merry Christmas to all our friends and fans! Play our song again to get you in the mood! Love from Graham, Chris and Geoff!
youtu.be/wTWu7Xo1gOc ...

This is the launch video to promote our Christmas single Let it Snow. The studio recorded version is available to download on all major music platforms from ...

Many thanks to "The Chronicle" for this and their support throughout the year.

It seems a lot of people are promoting our Christmas single - Let it Snow! ...

You can download on Apple or any other popular platform. All the money we raise will go to the Salvation Army Christmas Appeal.Album · 2020 · 1 Song ...